Alive
Roxanne is the daughter of an unnamed man, a student at Spoonerville's high school and is a supporting character in the 1995 film A Goofy Movie where she served as the love interest of Max Goof. She is voiced by Kellie Martin.

Roxanne has fair skin with a mole under her left eye and has chest-length ginger hair. She wears a teal short-sleeved t-shirt, blue jean shorts, a belt, white ballet flats and studded pink earrings.

Roxanne first appears at the start of the film in Max's dream where she calls to him and he finds her sitting on top of a column dressed in white. The dream all goes well, until Max turns into Goofy which causes Roxanne to scream in panic and flee.

She is later seen helping Max up after he falls and watches him run off in embarrassment after she hears his laugh which sounds like his father though she smiles at his laugh but is sad at his leaving. She next appears in the school's auditorium listening to her best friend Stacy, the school's student body president, announced that she is having an end of school year party where Powerline's concert will be broadcast. Roxanne along with the other students grow bored of Principal Mazur's speech and she is asked by one of the male students Chad to come with him to the party, but she presumably turned him down. Just then, Mazur disappears and "Powerline" appears onstage and sings to the students. However, when Mazur returns, it is revealed that "Powerline" is actually Max in disguise (who did it to impress Roxanne, which worked).

Later, whilst talking with Stacy, Roxanne is shown to have feelings for Max as well as when she looks away from the chatting Stacy, she smiles and she sees Max sitting outside Mazur's office awaiting his punishment. Stacy noticed this and coyly motivates her to talk to Max after she is nervous. Once Max sees her, he gets nervous and accidentally knocks her stuff down but this allows them to talk. Max then asks her out and she agrees to go with him to Stacy's party.

However, later that day, Max has to cancel the date when Goofy arranges for him and Max to on a father-son fishing trip. Upon arriving at Roxanne's home, he meets her father who is as overprotective as he is scary and Max nearly leaves out of fear but Roxanne appears and gets her father to leave. Roxanne then talks to Max looking forward to their date but he is forced to tell her that he can't go to the party, as she sadly says she will have to find someone else to join her. Max in order to try and impress Roxanne, says that he and Goofy are going to Los Angeles to see the Powerline concert as because Goofy "knows" Powerline, Max will be onstage during the final number. This news impresses Roxanne who tells Max to enjoy the concert and she will see him on TV. She kisses him on the cheek as she bids him goodbye while he is happily and clumsily walking away from her.

Near the end of the film, Roxanne attends Stacy's party, but is unhappy not to see Max on TV. Stacy reassures her and soon enough Max along with Goofy appears on stage with Powerline with Roxanne trying to imitate his dance.

When Max returns to Spoonerville, he goes to Roxanne's home and tells her that he lied about Goofy knowing Powerline and says he did it to get her to like him. Roxanne tells Max that she already liked him, as he is surprised to hear this especially as she revealed it was since she heard his laugh and offers to go out with him that night. Max accepts but recalls he that he can't as he has plans with Goofy, to which she is skeptical but he confirms it true and instead offers to go out the next day. Roxanne accepts and tries to shake his hand before Max kisses her on the lips. She is shocked but happy as the two laugh this off.

Just then, Max' father Goofy's car explodes, causing Goofy to fall right through the roof of Roxanne's porch. Max takes this opportunity to introduce the two. 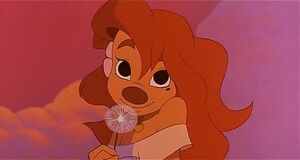 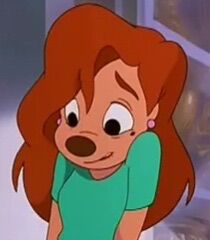 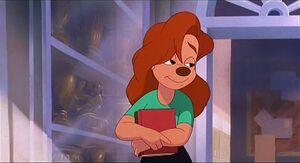 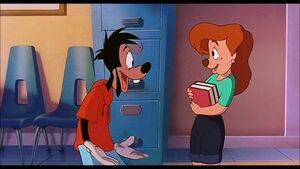 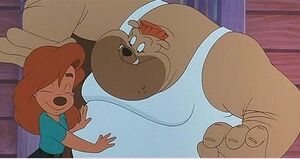 Roxanne and her father 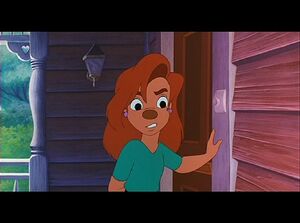 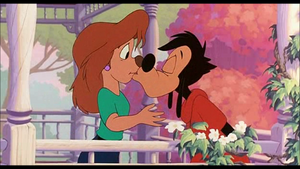 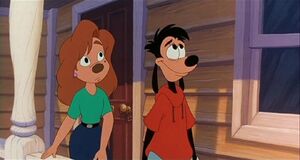 Add a photo to this gallery
Retrieved from "https://goof-troop.fandom.com/wiki/Roxanne?oldid=14225"
Community content is available under CC-BY-SA unless otherwise noted.